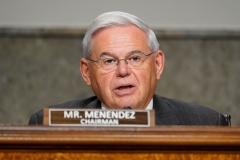 (CNSNews.com) - When asked if he thought public schools should be able to make COVID-19 vaccines mandatory for returning students, Sen. Bob Menendez (D-N.J.) said, “I do.”

CNSNews.com asked the senator on Tuesday, “Do you think that public schools and universities should be able to mandate that students be vaccinated for COVID-19?”
To which he affirmed, “I do.”

A number of universities have announced their plans to require student vaccinations for the upcoming school year, including Virginia Tech and The University of Colorado. They do allow for exemptions based on medical condition or religion.

However, according to Virginia Tech’s Frequently Asked Questions, the religious exemption form must be notarized, and Virginia’s state health commissioner reserves the right to exclude you from university activity if there are any perceived emergencies.

The Centers for Disease Control and Prevention advises that K-12 schools highly encourage vaccinations, yet does not suggest mandates. They also note that, “Many schools serve children under the age of 12 who are not eligible for vaccination at this time,” and highlight alternate prevention strategies.

Despite this, some health officials are pushing for states and school districts to require COVID vaccinations for school children returning in the fall.