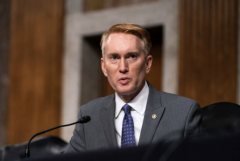 (CNS News) -- At a hearing Thursday about the budget for the Department of Health and Human Services, Sen. James Lankford (R-Okla.) challenged HHS Secretary Xavier Becerra to explain why President Biden's budget proposal refers to mothers as "birthing people" instead of "mothers.”

Lankford stressed that, “Mom is a pretty good word.”

At one point, Lankford said to Becerra, "I also noticed you changed a term in your budget work. You shifted in places from using the term ‘mother’ to ‘birthing people’ rather than mother. Can you help me get a good definition of birthing people?"

Lankford then said, "I was a little taken back when I just read it and saw it, that the term mother was gone in spots, and it was replaced with birthing people, and I didn’t know if this was a direction that you were going, if there were shifts, if there are regulatory changes that are happening related to that or what the purpose of that is.”

"I think it's probably, and again I’d have to go back to take a look at the language that was used in the budget, but I think it simply reflects the work that’s being done," said the HHS secretary.

Lankford sent out a press release discussing the phrase’s inclusion in the budget request and detailing his questioning of Becerra.

In the release, Lankford says he questioned Becerra “on language in the president’s proposed budget regarding maternal health that referred to ‘birthing people’ instead of mothers, even though the science is clear that women give birth.”

This term has been gaining popularity, particularly among LGBTQ activists and their allies.

According to a tweet from the pro-abortion NARAL, "When we talk about birthing people, we're being inclusive. It's that simple. We use gender neutral language when talking about pregnancy, because it's not just cis-gender women that can get pregnant and give birth. Reproductive freedom is for *every* body."

When we talk about birthing people, we're being inclusive. It's that simple.

We use gender neutral language when talking about pregnancy, because it's not just cis-gender women that can get pregnant and give birth. Reproductive freedom is for *every* body. https://t.co/9E9qKRMJTu

As the promotion of transgenderism increases, so has the use of so-called "inclusive" language, even in areas that are specific to one sex only, like motherhood.

Left-wing organizations and popular culture demand that people accept transgender people as the opposite of their biological/genetic sex. Thus, claiming that only women can give birth is false, according to their "logic."

Thomas Beatie, often referred to as the 'pregnant man', is a transgender "male" (biological female) who gave birth to daughter Susan Juliette Beatie, son Austin Alexander Beatie, and son Jensen James Beatie with his estranged wife Nancy. Thomas, formerly known as Tracy, has sole custody of his children and is now separated from wife Nancy and seeking a divorce. (Photo by Chris Jackson/TB/Getty Images)

In an article entitled ‘5 Things to Know to Make Your Feminism Trans-Inclusive’ the LGBTQ lobby group, Human Rights Campaign, asserts that “Trans women are women.”

Because transgender men, who are biologically women, can give birth, some people -- and even the government and the media -- are opting for the term "birthing person" in the name of wokeness.