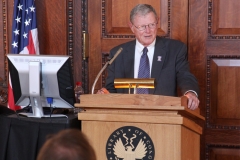 On Wednesday. Sen. Jim Inhofe (R-Okla.) told CNS News that the nation’s budget will never be balanced as long as President Joe Biden is in the White House.

CNS News asked Sen. Inhofe: “President Biden has presented Congress with a budget that proposes running $14.5 trillion in deficits over the next decade. Will Congress ever balance the budget?”

Inhofe said he’s optimist that Biden’s budget will not pass Congress in its current form. In any case, Inhofe said, the budget won’t be balanced until a new administration takes over, because Pres. Biden isn't even pretending that he wants to balance it:

“Well, first of all, you’re assuming that he’s gonna get all this and I’m not ready to assume that yet.

“One thing he’s doing that hasn’t been done before: most of the time, the Democrats or Republicans are at least saying there’s an effort to ultimately balance the budget. He’s not saying that. He’s just saying ‘It’s not gonna happen.’”

CNS News also asked Sen. Inhofe if there is a year in the foreseeable future in which the budget could be balanced.

Inhofe said there is, but not as long as Pres. Biden continues his spending habits and Democrats are in charge:

“Well sure, there is – but, not the way he is doing it right now. The way he is spending money. For example: how can you justify having a reduction in defense spending at the same time that you’re increasing other accounts by over 16%? It’s not going to work.

“So, that’s the problem. We’ve got to get a new administration.”