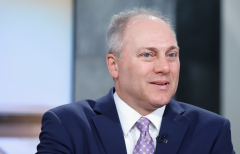 (CNS News) -- When asked whether a person should be required to show an ID in order to vote, as is required to purchase alcohol, House Minority Whip Steve Scalise (R-La.) said, “Absolutely.”

At the U.S. Capitol on Tuesday, CNS News asked Rep. Scalise, “Since we require someone to show an ID to buy alcohol, should we also require an ID to vote?”

He said, “Absolutely,” and added, “That ensures the integrity of everyone who votes in the United States.”