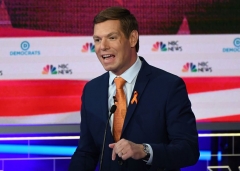 (CNSNews.com) - When asked whether a person should be required to show an ID in order to vote, as is required to purchase alcohol, Rep. Eric Swalwell (D-Calif.) said “IDs can be discriminatory,” because “some people don’t have access.”

At the U.S. Capitol on Tuesday, CNSNews.com asked, “Since we require an ID to buy alcohol, should we also require someone to show an ID to vote?”

“Look, I’m open to anything we can do to increase voter participation that does not suppress the vote,” Swalwell said.

“I think historically from poll taxes to other methods, IDs can be discriminatory if they don’t recognize that some people don’t have access to IDs,” he added.

The House of Representatives passed HR 1, the For the People Act, on March 3. The bill was then successfully filibustered in the Senate by Senate Republicans on June 22.

House Minority Leader Kevin McCarthy (R-Calif), a critic of the bill, said in a speech on the House floor on March 2, “Under H.R. 1, future voters could be dead or illegal immigrants or maybe even registered two to three times. Democrats don’t care.”