Is a 15-Week-Old Unborn Baby a Human Being? Sen. Lankford: 'Yes' 'I Think It is Self-Evident' 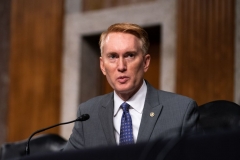 Senator James Lankford, R-OK speaks during a hearing with the Senate Appropriations Subcommittee on Labor, Health and Human Services, Education, and Related Agencies, on Capitol Hill in Washington DC on September 16th, 2020. (Photo by ANNA MONEYMAKER/POOL/AFP via Getty Images)

CNSNews.com asked the senator on Wednesday, “The Supreme Court this fall will review a Mississippi law that bans most abortions after 15 weeks of pregnancy. Is an unborn baby at 15 weeks a human being?”

When asked what he had to say to his colleagues refusing to answer that question, he said, “They should just look at a basic sonogram, or basic science, or look at the DNA. The DNA in that tissue in that child is different than the DNA of any other person in the world, including the mom.”

CNSNews.com also asked what he says to his colleagues who said they were waiting for the Supreme Court’s decision when asked if a unborn child at 15 weeks was a human.

“It’s a human being. I think it’s self-evident. Again, look at a sonogram of a child that’s 15 weeks with fingers and toes and a face and a nose. It’s pretty self-evident if you just take a look at that child,” he said.

The Supreme Court will hear arguments in Dobbs v. Jackson Women’s Health Organization this fall. The case challenges a precedent set in Roe v. Wade which outlawed abortions after viability, which was 24 weeks at the time.

This case will look at the constitutionality of abortion bans before viability.

In 2018, Mississippi passed a law banning abortion after 15 weeks in most circumstances.