Is a 15-Week-Old Unborn Baby a Human Being? Sen. Graham: ‘Yeah, I Think Most People Believe that to Be So on Our Side’ 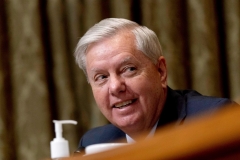 (CNSNews.com) - When asked if an unborn baby at 15 weeks is a human being, Sen. Lindsey Graham (R-S.C.) said “Yeah, I think most people believe that to be so.”

“The Supreme Court this fall will review a Mississippi law that bans most abortions after 15 weeks of pregnancy. Is an unborn baby at 15 weeks a human being?” CNSNews.com asked Graham Thursday on Capitol Hill.

“Yeah, I think most people believe that to be so, on our side,” Graham said. “I think the main thing that we know, that at 20 weeks a child can feel pain, and we provide anesthesia to the baby to operate on it, because we know-- science tells us-- that the nerve endings are well developed that to save the baby’s life through surgery you provide anesthesia.

“So, the theory of the case for me is, I would argue at 15 weeks the baby is well developed in terms of sensory pain, and we shouldn’t be aborting babies at that stage. So, the pain-capable theory is what I’m talking about. It’s not viability under Roe v. Wade,” the senator said.

“I think the state has a compelling interest in protecting all forms of life from death by excruciating pain,” he added, referencing the ability for babies in the womb to feel pain as early as 20 weeks.

The Supreme Court will hear arguments in Dobbs v. Jackson Women’s Health Organization this fall. They will determine if pre-viability abortion bans are constitutional, challenging a precedent from Roe v. Wade, which only prohibited abortion after viability.

In 2018, Mississippi passed a law prohibiting abortion after 15 weeks except in cases of medical emergency or severe fetal abnormality.