Ted Cruz: Biological Males Should Not Be Allowed to Compete in Girls’ Sports 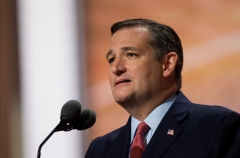 (CNS News) -- When asked whether biological males who identify as females should be allowed to play girls' sports, Sen. Ted Cruz (R-Texas) said, “no,” and explained that it would undermine girls’ sports and be unfair to be millions of female athletes.

At the Capitol on Wednesday, CNS News asked Senator Cruz, “When the House Judiciary Committee considered the Equality Act it rejected an amendment that said the act would not require biological females to face biological males in sports competition. Should biological males who say they identify as females be allowed to play girls’ sports?”

“No. I think it is unfair to girls to force them to compete against biological males,” the senator said.

“And we're seeing a serious undermining of girls’ sports -- as state championships, state records in locations across the country, one after the other, after the other, are falling and being taken by biological males. And I think that's unfair to millions of female athletes.”

The Equality Act passed the House of Representatives in May 2019 by a vote of 236-173. Every House Democrat voted for the bill, as well as eight Republicans. The legislation went to the Senate floor for discussion on Thursday, June 18.

The Equality Act prohibits discrimination based on “sex, sexual orientation, and gender identity,” in the context of several areas, including “public accommodations and facilities, education, federal funding, employment, housing, credit, and the jury system.”

The bill also "prohibits the Religious Freedom Restoration Act of 1993 from providing a claim, defense, or basis for challenging such protections.”