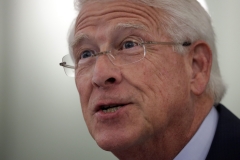 (CNS News) -- When asked whether he would support Joe Biden's plan--should he be elected president--to allow biological males who identify as females to use women’s bathrooms and locker rooms, Sen. Roger Wicker (R-Miss.) said he would have “serious reservations."

At the Capitol on Wednesday, CNS News asked Senator Wicker: “Joe Biden says that as president he will require federally funded schools to let biological males who identify as females use female bathrooms and locker rooms. Do you support that?”

The senator said, “I would, I would have serious reservations.”

The campaign website of presidential candidate Joe Biden, who is the presumptive nominee for the Democrat Party, states:

“On his first day in office, Biden will reinstate the Obama-Biden guidance revoked by the Trump-Pence Administration, which will restore transgender students’ access to sports, bathrooms, and locker rooms in accordance with their gender identity. He will direct his Department of Education to vigorously enforce and investigate violations of transgender students’ civil rights.”

Here is a screen capture of the section of Joe Biden's website where he says he "will restore transgender students' access to sports, bathrooms, and locker rooms in accordance with their gender identity:"