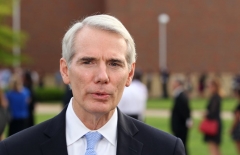 (CNS News) -- When asked to predict when the federal government will pay off the federal debt for this fiscal year alone, which currently is $3.78 trillion, Senator Rob Portman (R-Ohio) said that getting “the economy moving again” is “key” to paying down the debt.

At the U.S. Capitol on Thursday, CNS News asked Sen. Portman, “So far in fiscal 2020, the federal debt has increased $3.78 trillion. When do you predict the government will pay off the debt it added this year?”

The senator responded, “Oh gosh. My hope is that we get the economy moving again, that's the key.”