Sen. Grassley on Latest Trillion-Dollar COVID Relief: ‘Nobody Can Say No’ to Spending, ‘Ever’ 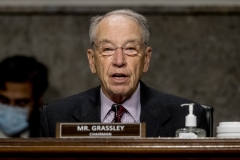 (CNS News) -- When asked how many trillion dollars should be in the new COVID relief bill – Republicans want $1 trillion and Democrats want $3.4 trillion -- Senator Chuck Grassley (R-Iowa) said “there needs to be some limit," but in Congress "nobody can say no, ever," on spending.

At the U.S. Capitol on Tuesday, CNSNews.com asked Sen. Grassley, “How many trillion [dollars] should be in the new COVID relief bill?”

The senator responded, “There needs to be some limit, right now the only limit I’ve heard about is a trillion dollars.”

“But whether it's nine hundred, or one-tenth or one and two-tenths, the most important thing is to have a limit before you start negotiating,” Grassley said.

“Because otherwise this thing is going to grow like topseed,” he added. “Nobody can say no, ever. And you have to make people prioritize.”

Two bills are currently under consideration in the Congress. House Speaker Pelosi (D-Calif.) has proposed the $3.4 trillion HEROES act, or “Health and Economic Recovery Omnibus Emergency Solutions.” The HEROES act includes stimulus checks, PPP loans, and expanded Medicare and Medicaid among other provisions, according to a congressional summary.

Pelosi gave a summary of the bill on May 15: “The Congress must honor its responsibility to the American people to lessen the blow of the coronavirus by making the same serious investment of The HEROES Act to our state, local, tribal and territorial governments.”

“The plan that we are voting on today will make a tremendous difference not only in the budgets in the states, but in the lives of the American people,” she said.

“Getting kids back in school, getting workers back to work, and winning the health care fight against the virus,” are the main goals of the bill, according to McConnell.