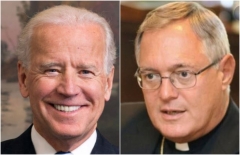 On Tuesday evening, following the announcement that Biden had selected a vice presidential running mate, Kamala Harris, Bishop Tobin tweeted, “Biden-Harris. First time in a while that the Democratic ticket hasn’t had a Catholic on it. Sad.”

Tobin tweeted the statement despite the fact that Biden is a self-professed Catholic, albeit one who supports abortion, homosexual marriage, in vitro fertilization (IVF), and a variety of other practices that are defined as immoral, disordered, and contrary to the teachings of the Catholic Church.

“I’m a practicing Catholic,” Biden says on his website, “I believe faith is a gift. And the first obligation we all have is, ‘Love your God,’ the second one is, ‘Love your neighbor as yourself.”

On May 7, Tobin tweeted, “Just saw a headline in a Catholic newspaper with the phrase ‘pro-abortion Catholic.’ Sorry. That’s a contradiction in terms. You can’t be a Catholic, at least not an authentic one, and be ‘pro-abortion.’ Or ‘pro-choice.’ It’s the same thing.”

Biden, despite his Catholic faith, has publicly supported abortion for decades and voted to ensure that it continues. On June 20, 2020, Biden said that the landmark Supreme Court case on abortion, Roe v Wade, “should be law” when speaking at a Planned Parenthood forum in South Carolina.

The Catechism of the Catholic Church, which all Catholics are obligated to follow, teaches, “Since the first century the Church has affirmed the moral evil of every procured abortion. This teaching has not changed and remains unchangeable. Direct abortion, that is to say, abortion willed either as an end or a means, is gravely contrary to the moral law….”

The Catechism further states, “Formal cooperation in an abortion constitutes a grave offense. The Church attaches the canonical penalty of excommunication to this crime against human life. ‘A person who procures a completed abortion incurs excommunication latae sententiae,’ ‘by the very commission of the offense,’ and subject to the conditions provided by Canon Law. The Church does not thereby intend to restrict the scope of mercy. Rather, she makes clear the gravity of the crime committed, the irreparable harm done to the innocent who is put to death, as well as to the parents and the whole of society.”

On engaging in homosexual acts, contrary to having a homosexual inclination, the Church teaches, “Basing itself on Sacred Scripture, which presents homosexual acts as acts of grave depravity, tradition has always declared that ‘homosexual acts are intrinsically disordered.’ They are contrary to the natural law. They close the sexual act to the gift of life. They do not proceed from a genuine affective and sexual complementarity. Under no circumstances can they be approved.”