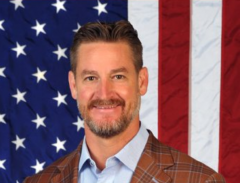 (CNS News) -- When asked whether he supports presidential contender Joe Biden’s plan to allow biological males who identify as females to use women’s bathrooms and locker rooms in federally funded schools, Rep. Greg  Steube (R-Fla.) said, “no.” He added that he has introduced an amendment to try to stop such a policy on the congressional level.

At the Capitol on Wednesday, CNS News asked Rep. Steube, “Joe Biden says that as president he will require federally funded schools to let biological males who identify as females use female bathrooms and locker rooms. Do you support that?”

“So I don’t think there should be any confusion on that,” he said. “And you can look at the amendment that I filed on the Equality Act that was passed in the Judiciary [Committee] and I did that same amendment on the floor of the House because I don’t feel it's appropriate that we’re going to have biological men competing with biological females.”

On his presidential campaign website, Democrat Joe Biden states,  “Ensure young LGBTQ+ people are supported and protected in our schools and college campuses by: Guaranteeing transgender students have access to facilities based on their gender identity.”

It further states, “On his first day in office, Biden will reinstate the Obama-Biden guidance revoked by the Trump-Pence Administration, which will restore transgender students’ access to sports, bathrooms, and locker rooms in accordance with their gender identity. He will direct his Department of Education to vigorously enforce and investigate violations of transgender students’ civil rights.”

Here is a screen capture of the section of Joe Biden's website where he says he "will restore transgender students' access to sports, bathrooms, and locker rooms in accordance with their gender identity":