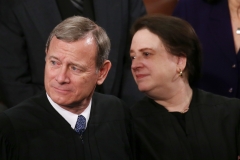 (CNS News) – In reaction to the Supreme Court’s June 29 ruling (5-4) in the abortion case June Medical Services v Russo, conservative and pro-life advocates said the decision was “tragic” and a sad day for the rule of law.”

In the ruling, Chief Justice John Roberts sided with the liberals on the court who said requiring doctors who perform abortions to have admitting privileges at nearby hospitals was unconstitutional. Several years ago, in a nearly identical case, Roberts said it was constitutional.

“The March or Life is appalled by the Supreme Court’s decision today which failed to hold Louisiana abortion facilities accountable for their numerous health and safety violations,” said Jeanne Mancini, president of March for Life.  “The legislation at issue in June Medical Services v Russo was designed to safeguard women’s health and safety, which the abortion business in Louisiana egregiously sidelined for the sake of profit. No abortion facility should receive a free pass to provide substandard care.”

Abby Johnson, a former director of Planned Parenthood and now a supporter of women and the unborn, reacted to the ruling, “Women were dealt a huge blow in today’s ruling from the Supreme Court. By deciding that abortion doctors and clinics need to follow a separate, less stringent set of rules than every other medical facility leaves women open to the consequences of an industry that has mastered cutting corners on healthcare.”

“Most any state health department report on their local abortion clinics will more than likely have repulsive citations that should make any woman question walking inside those doors,” she said. “Things like rusty equipment, the use of expired medications, tears in surgery and exam tables, holes in floors where rodents can slip inside are all fairly common citations, which would shut down most restaurants and medical facilities - unless they were abortion clinics.”

Tony Perkins, president of the Family Research Council, a Washington D.C. public policy group, spoke on the ruling’s relation to Roe v Wade. “With this decision, the Supreme Court has prevented Louisiana from enforcing the law to stop abortionists who regularly deride and violate health standards for women seeking abortion,” he said.

"Despite the Left's hysterical fear-mongering, the case was not about the Supreme Court's self-created 'right' to an abortion in Roe,” said Perkins. “This case was about whether the state has the right to ensure that abortionists who take women's money also provide for their safety. However, I do look forward to the day when the Supreme Court will correct the gross injustice of the Roe v. Wade decision that has led to the killing of tens of millions of unborn babies.”

Other conservative groups chastised the left-wing justices of the court. (The four conservatives dissented from the ruling: Clarence Thomas, Samuel Alito, Brett Kavanaugh, and Neil Gorsuch.)

Judicial Watch President Tom Fitton, said, “Chief Justice Roberts, in another political move, bends the rule of law to accommodate and protect the radical political position that the Constitution prevents the states from taking steps to protect innocent life. The chief justice has repeatedly broken his promise to be a neutral ‘umpire’ and instead too often acts as a ‘politician in robes.’”

American Life League’s Vice President Hugh Brown stated his disappointment in the court: “The liberal justices and John Roberts are racists. They want black babies dead. Six out of ten babies (61 percent) who are aborted in Louisiana are black. This is nearly twice the national average (38 percent).”

“They know this,” said Brown. “In fact, Justice Ginsburg is on record stating that support of abortion is rooted in concern ‘about population growth and particularly growth in populations that we don’t want to have too many of.’ She means black people. If Black Lives really mattered to these hateful justices, they would stop serving evil and targeting the elimination of black babies.”

Conservative groups dissented from a medical perspective as well. The American College of Pediatricians, which had joined with the American Association of Medical Ethics in filing an amicus curiae brief in support of the Louisiana law, pointed to the dangers of elective abortion in comparison to the continuation of childbirth in their brief.

They released a statement on the ruling that partly said, “Tragically, in a 5-4 ruling, the Supreme Court struck down this law requiring doctors who perform abortions to have the right to admit patients at nearby hospitals. As a result, the highest court in the land has failed to hold abortion clinics in Louisiana to the same standard of care as every other surgical center in the state.”

“The dangers of elective abortion, both surgical and drug induced, are well documented,” they said. “Elective abortions send patients to emergency rooms, and 5 percent of women undergoing drug-induced abortions will require emergency room evaluation. The Supreme Court’s decision puts women at risk at an alarming rate, and gives Louisiana abortion clinics the legal right to put profit margins ahead of women’s health and safety.”

Dr. Patrick Lee, the director for the Center for Bioethics at Franciscan University of Steubenville, said, “Sadly, the health of women took a backseat to abortion today when the Supreme Court allowed the abortionists an exemption from medical standards that apply to all other doctors who work at ambulatory surgical centers.”

Conservative and Republican court watchers had expected the court to rule in favor of the Louisiana law, but Chief Justice John Roberts, who had been appointed by George H.W. Bush, sided with the liberal wing of the court –not for the first time -- swinging the majority in favor of June Medical Services.