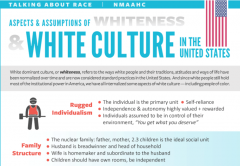 (CNS News) -- The National Museum of African American History & Culture (NMAAHC) claims that "self-reliance," “objective, rational thinking,” “hard work,” the "nuclear family," and being “polite” are among the aspects and assumptions of “white culture” in the United States.

On its website, under the category of “Talking about Race,"  the NMAAHC published a page entitled “Whiteness.” The sub-headline states, “Since white people in America hold most of the political, institutional, and economic power, they receive advantages that nonwhite groups do not.”

It then states, “Whiteness is also at the core of understanding race in America. Whiteness and the normalization of white racial identity throughout America's history have created a culture where nonwhite persons are seen as inferior or abnormal.”

The Whiteness page – there apparently is no “Blackness” page – further states, “Whiteness (and its accepted normality) also exist as everyday microaggressions toward people of color. Acts of microaggressions include verbal, nonverbal, and environmental slights, snubs or insults toward nonwhites. Whether intentional or not, these attitudes communicate hostile, derogatory, or harmful messages.”

The page does not define what “nonverbal and environmental slights” are.

Scrolling down the web page there is a section entitled “White Dominant Culture,” with a sub-section on “White supremacy.” Here, the Smithsonian museum states that white supremacy is “an ideology where white people are believed to be superior to nonwhite people.”

“The belief of white superiority has been part of the United States since its inception,” claims the museum, which then adds, “White supremacy and its legacy can still be found in our legal system and other institutions through coded language and targeted practices.”

The museum does not define what this “coded language” is.

Below those statements the NMAAHC presents a graphic to illustrate "Aspects & Assumptions of Whiteness & White Culture in the United States." Some of these aspects include "rugged individualism ... self reliance ... the nuclear family ... objective, rational linear thinking ... hard work is the key to success ... follow rigid time schedules ... [and] be polite.

The "data source" for the chart is named as Judith H. Katz, who is the executive vice president of the Kaleel Jamison Consulting Group, Inc. Katz's "landmark book, White Awareness: Handbook for Anti-Racism Training (1978), was the first systematic training program to address racism from a white perspective," states her bio page.

Also on the Whiteness page, the museum states, "Thinking about race is very different for nonwhite persons living in America. People of color must always consider their racial identity, whatever the situation, due to the systemic and interpersonal racism that still exists." (Emphasis added.)

Thomas Sowell, author and economist, stated in a recent interview, “[Systemic racism] really has no meaning that can be specified and tested in the way that one tests hypotheses. It does remind me of the propaganda tactics of Joseph Goebbels during the age of the Nazis, in which he's supposed to have said that 'People will believe any lie if it is repeated long enough and loud enough.'”

He continued, “It's one of many words that I don't think even the people who use it have any clear idea what they're saying. Their purpose is served by having other people cave in."

Ron Christie, author of Blackwards: How Black Leadership Is Returning America to the Days of Separate But Equal, tweeted his reaction to NMAAHC discussion, “This must be a joke. I can’t imagine @NMAAHC would put out trash saying being self-reliant, hard-working and respect for authority is being white. So being black is being dependent, lazy and disrespectful of authority?  Our taxes paid for this?”

CNS News contacted the National Museum of African American History & Culture for clarification on whether the information on their "Whiteness" web page is to be taken literally, word for word. As this story was posted, CNS News had not received a response. A spokesperson for the Smithsonian Institute press office said a statement may be forthcoming from the NMAAHC on the "Whiteness" page.