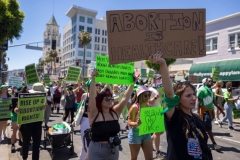 Protesters march on Hollywood Boulevard to denounce the U.S. Supreme Court on July 9, 2022 in the Hollywood section of Los Angeles, California. (Photo by David McNew/Getty Images)

(CNSNews.com) - A medical analysis from the Charlotte Lozier Institute released in July revealed that every state with pro-life laws allows necessary medical treatments for women, permitting any procedure that would save a woman’s life.

Despite the ever-increasing outcry that pro-life laws prevent women from receiving the care they need, this Charlotte Lozier Institute medical analysis reveals that each of the 23 states with strong pro-life laws allows treatment for miscarriage, ectopic pregnancy, and any life-threatening conditions.

Mary E. Harned, J.D., a CLI legal scholar and former member of the Select Investigative Panel of the U.S. House Energy and Commerce Committee stated on this topic,

“A plain reading of any of these statutes easily refutes the false and dangerous misinformation being spread by pro-abortion activists. Further, none of these laws prohibit a medical professional from acting as necessary when facing a life-threatening medical emergency. To claim otherwise is either ignorance of the law or willful misrepresentation at the expense of women and their unborn children who deserve to be treated with dignity and respect.” 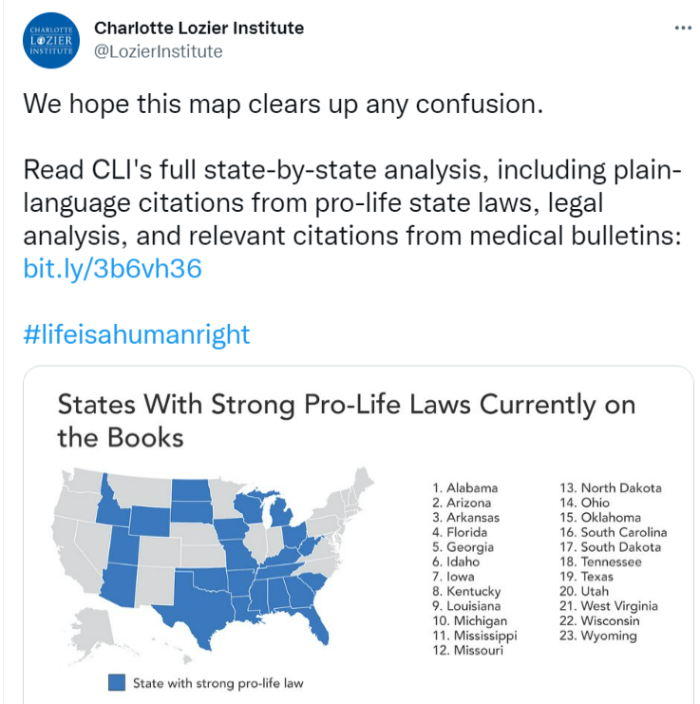 The “Pro-Life Laws Protect Mom and Baby: Pregnant Women’s Lives are Protected in All States” analysis goes on to read, “Each of these states permits abortion in those rare and heartbreaking circumstances when it is necessary to save the life of a pregnant woman. Physicians can make this determination based on their ‘reasonable medical judgment.’”

It summarizes each of the state laws and cites the American College of Obstetricians and Gynecologists (ACOG) practice bulletins. 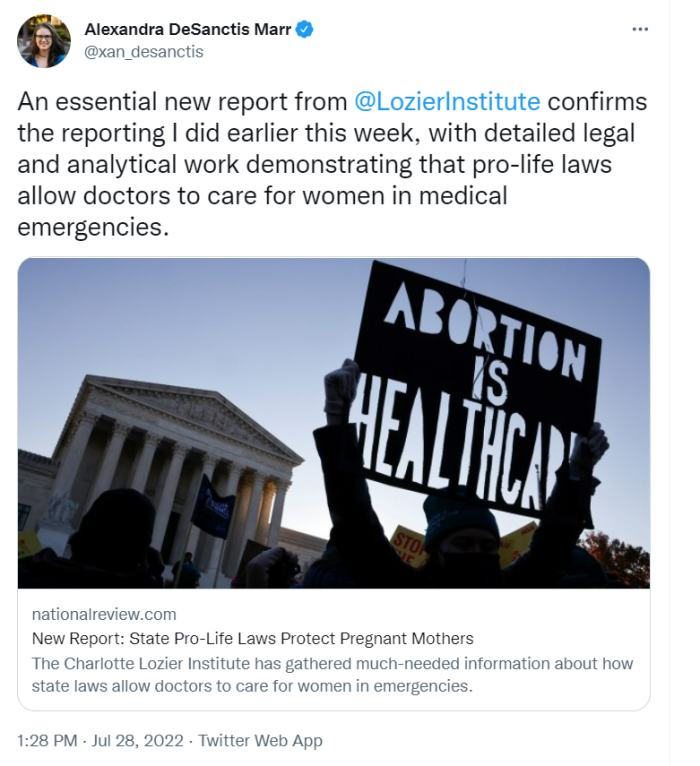 “It shall not be a violation … for a licensed physician to perform a medical procedure necessary in reasonable medical judgment to prevent the death or substantial risk of death due to a physical condition, or to prevent the serious, permanent impairment of a life-sustaining organ of a pregnant woman.”

Dr. Ingrid Skop, M.D., F.A.C.O.G., a board-certified OB/GYN and professional who has delivered over 5,000 babies, spoke out about this misconception that women will not receive the care they need.

“Over and over again, state pro-life laws, including in my home state of Texas, direct doctors to use their reasonable medical judgment. What’s reasonable? The American College of Obstetricians and Gynecologists has published dozens and dozens of bulletins that provide specific medical guidance for treating pregnant women experiencing both common and uncommon complications during pregnancy.

“When I read pro-abortion media reports quoting doctors as saying they are unsure what action they can take in the Dobbs era, I have to ask if the doctors have read the law and if they’ve read the ACOG bulletins that are commonly used as guidance by OB/GYNs,” Skop said.

“Both the law and the medical guidance are in agreement,” she went on to state. “Women facing complications need to be cared for. Pro-life state laws protect the lives of pregnant women and do not interfere with the normal practice of medicine when treating ectopic pregnancies, miscarriages, and other life-threatening pregnancy complications.” 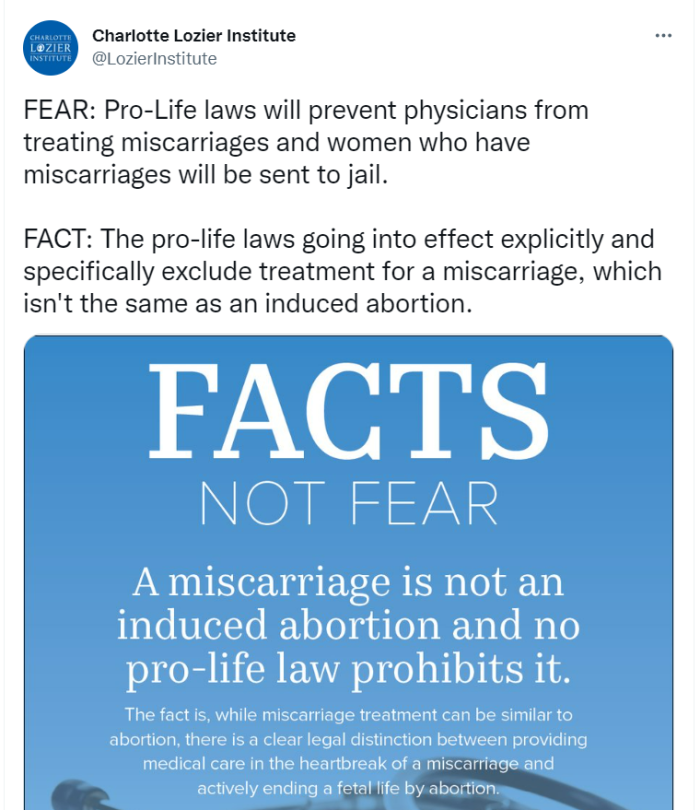 “FEAR: Pro-Life laws will prevent physicians from treating miscarriages and women who have miscarriages will be sent to jail.

FACT: The pro-life laws going into effect explicitly and specifically exclude treatment for a miscarriage, which isn’t the same as an induced abortion.”

This tweet was followed by an image which read, “Facts not fear. A miscarriage is not an induced abortion and no pro-life law prohibits it. The fact is, while miscarriage treatment can be similar to abortion, there is a clear legal distinction between providing medical care in the heartbreak of a miscarriage and actively ending a fetal life by abortion.” 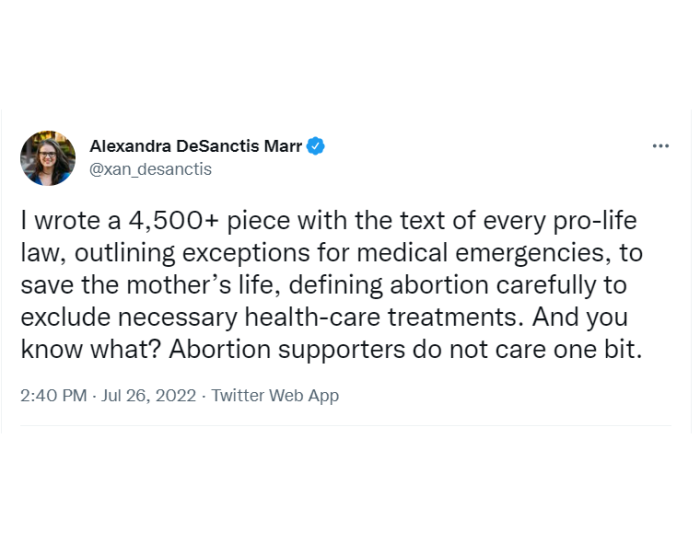 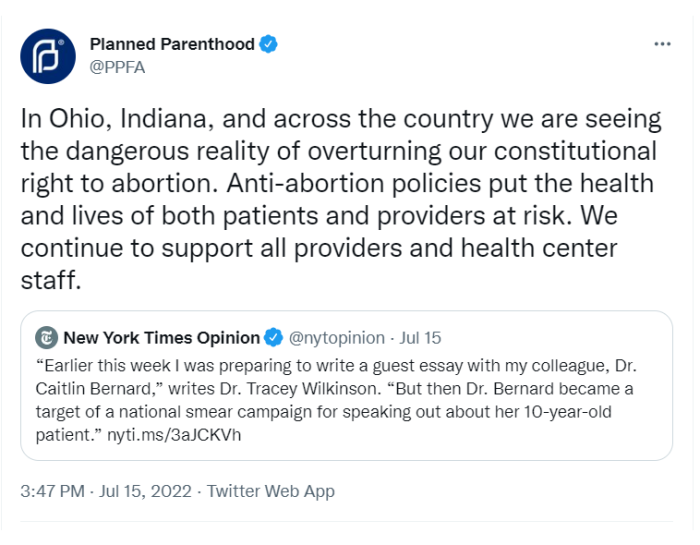 “In Ohio, Indiana, and across the country we are seeing the dangerous reality of overturning our constitutional right to abortion. Anti-abortion policies put the health and lives of both patients and providers at risk. We continue to support all providers and health center staff.”

This is in contradiction with state laws which clearly state necessary medical care must always be provided to women, no matter the situation.

Health and Human Services Secretary Xavier Becerra also addressed this issue and wrote in a July letter to health care providers that,

“Federal law pre-empts state abortion bans in cases where women face medical emergencies associated with pregnancy under the Emergency Medical Treatment and Active Labor Act. If an abortion is necessary to treat a woman facing a medical emergency, physicians must offer the procedure…medical emergencies include but are not limited to ectopic pregnancies, complications from miscarriages and hypertensive disorders such as preeclampsia that usually occurs after 20 weeks of pregnancy,” according to CNBC.