Sen. Young: 42% of Babies Born on Medicaid is ‘Not a Good Thing’ 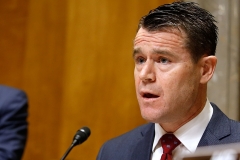 At the Capitol on Tuesday, CNSNews.com asked Sen. Young, “According to the CDC, 42% of the babies born in America in 2020 were born on Medicaid. Is that a good thing?”

The senator said, “No, it’s not a good thing, I mean the goal of—ideally the goal of the Medicaid program should be to help people to a life of self-sustainment, right? Unfortunately, it’s a long-term health policy solution for a lot of people.”

“So, that’s a failure of leadership at the federal level to change that program over a number of years,” he said.  “We need to be thinking in those terms across all of our social and public health programs. How do we—how do we help people get into a self-sufficient spot?”

“I wouldn’t go that far, I don’t know that Medicaid is responsible for non-marital births and I also know there are a lot of Americans who aren’t married, but are good, involved parents, so it’s hard to paint with a broad brush,” Sen. Young replied.

“But studies do show that children that grow up in married households tend to do better,” said the senator.  “It’s a generalization, but they tend to do better and so we should encourage people to marry when they have children. But we should also understand that there are some cases where that’s not appropriate.”