Sen. Thom Tillis: ‘I Don’t Think We Can’ Have Free Trade with a Communist Country 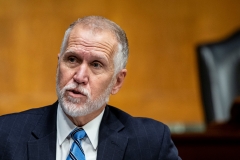 (CNS News.com) – When asked if it is possible for the U.S. to engage in free trade with a communist country such as China, Sen. Thom Tillis (R-N.C.) said, “No, I don’t think we can.”

At the Capitol on Thursday, CNSNews.com asked Sen. Tillis,  “The U.S. trade deficit with China in 2021 was more than $300 billion for the tenth year in a row. Can the United States have free trade with a communist country?”

“Well, I think a part of why we have, you know the -- you have to follow, short of becoming protectionist, but you have to find other ways to play a game that China’s outplaying us right now. And a lot of that has to deal with moving supply chains’ independence to other partners, more reliable jurisdictions. It’s things that we’ve been talking about, now we have do it.”