Sen. Rounds: 42% of Babies Born on Medicaid Good as a ‘Safety Net’ But Private Health Care is Best 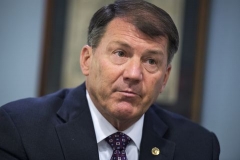 (CNSNews.com) -- When asked if it was a good thing that 42% of the babies born in America in 2020 were born on Medicaid, Sen. Mike Rounds (R- S.D.) said, “Long term, it would be better if we had more of those babies that were born under what I would call private healthcare, rather than under a government program -- but as a safety net it is good that it is available to them.”

He also said it is better to have a mom and a dad at home to provide a “more healthy and prosperous opportunity for young kids.”

At the Capitol on Thursday, CNSNews.com asked Sen. Rounds, “According to the CDC, 42% of the babies born in America in 2020 were born on Medicaid. Is that a good thing?”

The senator said, “What that suggests is that they are in need of assistance from a government program, which is not a good indication that our economy is moving in the right direction. But the good part of it is that there is actually a way to help those young mothers actually get the medical assistance they need for a healthy baby.”

“Long term, it would be better if we had more of those babies that were born under what I would call private healthcare, rather than under a government program -- but as a safety net it is good that it is available to them.”

“Most certainly not having two incomes to help support a child makes it more difficult,” Sen. Rounds said. “And so, look, if we find that when you have a working mother who is also going to have a baby and does not have the support of a second income, it makes it more difficult for that mom. And I think our role in this particular case is to make sure that that baby does not suffer, at the same time find encouragement so that the good healthcare is delivered to them.”

“But having it available, whether it be Medicaid or otherwise, is a response to a symptom -- it does not cause the symptom,” said the senator. “The symptom in this particular case is having mothers that are not with a spouse or with a partner trying their best to take care of a child.”

“I believe in the family and I most certainly think that there’s pretty strong evidence that the way it was supposed to be set up in the first place which is, you know, to have a mom and a dad clearly points to not just a more healthy and prosperous opportunity for young kids, it means it’s better long-term and it means less reliance on a government program.”