Sen. Manchin: If ‘It’s Fair Trade, Not Subsidized,’ U.S. ‘Can Have A Trade System With Anybody’ 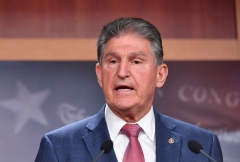 (CNS News.com) –  Sen. Joe Manchin (D- W.Va.) said it is possible for the U.S. to engage in free trade with a communist country such as China, “As long as it’s fair trade, not subsidized.”

At the Capitol on Thursday, CNSNews.com asked Sen. Manchin, “The U.S. trade deficit with China in 2021 was more than $300 billion for the tenth year in a row. Can the United States have free trade with a communist country?”

The senator said, “We’ve done it for ten years. You can have a trade system with anybody you want to as long as it’s fair trade, not subsidized trade because it hurts the markets here.”