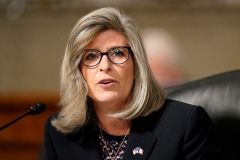 At the Capitol on Wednesday, CNSNews.com asked Sen. Ernst, “According to the CDC, 42% of the babies born in America in 2020 were born on Medicaid. Is that a good thing?”

The senator said, “It is not a good thing and we just need our families to be healthy and productive, and it means encouraging more young people to get engaged in the work force and then providing better opportunities for their children.”

“I do, because we find that when you have two-parent households oftentimes those families will do much better and, you know, also help with the costs and challenges of raising those children,” Sen. Ernst said.