Sen. Grassley on 42% of Babies Born on Medicaid: Can’t Fault Them If ‘It’s The Only Health Care They Qualify For’ 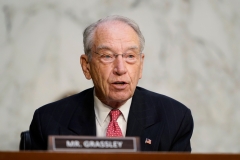 (CNSNews.com) -- When asked if it was a good thing that 42% of the babies born in America in 2020 were born on Medicaid, Sen. Chuck Grassley (R- Iowa) said, “I’m not going to find fault with people being on Medicaid, if that’s the only health care they can qualify for.”

At the Capitol on Wednesday, CNSNews.com asked Sen. Grassley, “According to the CDC, 42% of the babies born in America in 2020 were born on Medicaid. Is that a good thing?”

The senator said, “Well, it doesn’t surprise me because Medicaid’s been so expanded, number two. Number one, is it goes along with the increase in single-family parents I imagine. But the fact that babies are being born, if you believe in life issues, you take care of them however you take care of them. So, I’m not going to find fault with people being on Medicaid, if that’s the only health care they can qualify for.”

“I couldn’t make a judgment on that without studying the statistics on it, but babies have to be taken care of whether it’s from two-parent families or one-parent families, it’s just that simple,” he said. “If you’re pro-life, you’ve got to be saving lives.”