Sen. Cruz on Whether He Uses Cannabis: ‘I Don’t Because It Is Illegal and Because It’s Harmful to You’ 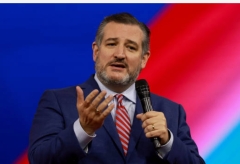 (CNSNews.com) - Sen. Ted Cruz (R.-Texas) told CNSNews.com this week that he does not use cannabis because it is “illegal,” “harmful to you” and “not healthy.”

At the Capitol on Tuesday, CNSNews.com asked Cruz: “The House voted last week to legalize cannabis. Do you use cannabis and if not, then why not?”

Cruz (R-Tex.) responded: “I don’t because it is illegal and because it’s harmful to you. It’s not healthy.”