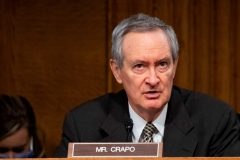 (CNSNews.com) -- When asked if it was a good thing that 42% of the babies born in America in 2020 were born on Medicaid, Sen. Mike Crapo (R- Ida.) said, “It’s really not good that we have such a large population based on Medicaid. We need to provide better for them.”

At the Capitol on Thursday, CNSNews.com asked Sen. Crapo, “According to the CDC, 42% of the babies born in America in 2020 were born on Medicaid. Is that a good thing?”

The senator said, “Well, I mean no, it’s really not good that we have such a large population based on Medicaid. We need to provide better for them.”

“I don’t have any data to confirm or deny that,” said the senator.  “It’s unfortunate, but I don’t have the data to say yes or no.”

The CDC released new data on births in 2020 listing the statistics of babies born on Medicaid, born to married and unmarried mothers, the race of the mothers, as well as other relevant information.