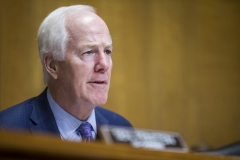 (CNSNews.com) -- Sen. John Cornyn (R.-Tex.) told CNSNews.com on Wednesday he is “convinced” that cannabis (marijuana) is harmful and we need to conduct “serious studies into the impact” of how it affects women and children.

At the Capitol on Wednesday, CNSNews.com asked Cornyn: “The House voted last week to legalize cannabis. Do you use cannabis and if not, why not?”

Sen. Cornyn said, “Well, I think it’s premature. We need to have some serious studies into the impact on developing children’s brains and pregnant women and alike.”

“I’m a member of the Senate Drug Caucus and we’ve had hearings from experts who said we just don’t know the answers to a lot of these questions, and the concentration of THC in cannabis today is not what it was just 20 or 40 years ago.”

“So, I think before we—we take an action like the House were to do, we need to get answers to those questions.”

CNS News followed up, “Do you think it’s harmful at all?”

The senator replied, “I’m convinced it is, yes.”