Sen. Cassidy: Free Trade With Communist China is Possible, But Not When They ‘Game the Rules’ 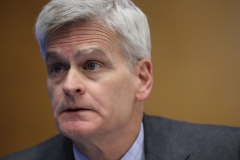 (CNS News.com) –  Sen. Bill Cassidy (R-La.) said it is possible for the U.S. to engage in free trade with a communist country such as the People’s Republic of China, “but that communist country needs to obey the rules.”

He added that China has “been gaming the international trade rules to their advantage.”

At the Capitol on Feb. 9, CNSNews.com asked Sen. Cassidy,  “The U.S. trade deficit with China in 2021 was more than $300 billion for the tenth year in a row. Can the United States have free trade with a communist country?”

The senator said, “Well, yes, but that communist country needs to obey the rules. If they game the rules, so that it is to their advantage, then that’s not free trade and I think that’s what we need to look at.”

CNSNews.com asked the follow up question, “Do you think there is anything that the United States could do about it?”

“Absolutely,” the senator said. “I absolutely think that there’s things the United States could do about it. Now, we want to work with allies, but it’s pretty clear that China’s been gaming the international trade rules to their advantage.”

“You know, trade treaties are not suicide bags, we just need to figure it out and there’s a way to figure it out in which we have the benefits of trade with China, there’s a lot of benefits,” he added. “But they don’t get to game the system to their benefit and our detriment.”

Since the Communists took over China in 1949-50, the regime has killed more than 65 million of its own people for political reasons, according to The Black Book of Communism (Harvard University Press)