Sen. Blunt: Babies Born on Medicaid is Better Than ‘Babies Being Born and Not Having Any Health Support System’ 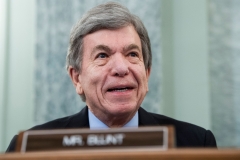 (CNSNews.com) -- When asked if it was a good thing that 42% of the babies born in America in 2020 were born on Medicaid, Sen. Roy Blunt (R- Miss.) said, “Well, it’s a better thing than those babies being born and not having any health support system.”

At the Capitol on Tuesday, CNSNews.com asked Sen. Blunt, “According to the CDC, 42% of the babies born in America in 2020 were born on Medicaid. Is that a good thing?”

The senator said, “Well, it’s a better thing than those babies being born and not having any health support system.”

“Well, Medicaid almost always covers low-income women who have babies,” said Blunt. “And again, it’s always better to have a more stable family environment to be born into, in my view. It’s also important to have health care when you’re growing up, and Medicaid helps provide that for lots of kids.”