Pro-Choice Sen. Peters: ‘The Fact that Babies are Born is Always a Good Thing, I Love Babies' 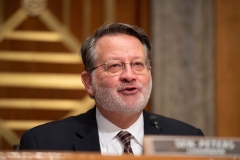 (CNSNews.com) -- When asked if it was a good thing that 42% of the babies born in America in 2020 were born on Medicaid, Sen. Gary Peters (D-Mich.), who supports abortion, did not answer directly but said, “The fact that babies are born is always a good thing.”

At the Capitol on Wednesday, CNSNews.com asked Sen. Peters, “According to the CDC, 42% of the babies born in America in 2020 were born on Medicaid. Is that a good thing?”

The senator said, “The fact that babies are born is always a good thing, I love babies.”

Although Sen. Peters says babies being born is “always a good thing,” in his re-election he was endorsed by the pro-abortion group NARAL.

“Right now, we need champions like Senator Gary Peters fighting for reproductive freedom in the Senate,” said NARAL’s Brener-Schmitz. “As extreme anti-choice Republicans like John James and Donald Trump continue to launch attack after attack on women and families, it’s critical to have strong advocates who will stand up for our fundamental freedoms in the face of these unprecedented threats. Senator Peters has always had our back in the fight for reproductive freedom, and we’re proud to endorse him for re-election.”

“I am honored to receive NARAL’s endorsement,” said Senator Peters. “At a time when women’s health care and reproductive freedoms are under attack in Michigan and around the country, it is more important than ever to have leaders who will fight to defend them. A woman has a fundamental right to make her own decisions about her own health care and politicians have no business getting in the way of that.”