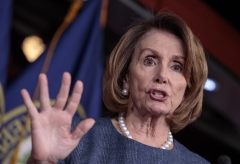 At the U.S. Capitol, CNSNews.com asked Pelosi, “The federal government ran a $2.7-trillion deficit in fiscal 2021 and has a $475-billion deficit so far this year. Will President Biden ever balance the budget?”

Pelosi responded: “President Biden has been responsible for reducing the national debt by a trillion dollars. That is a record that no other president can claim to make. Everything that we have done under his leadership has been paid for. He has not increased the national debt.”

It was not “a trillion dollars” less.