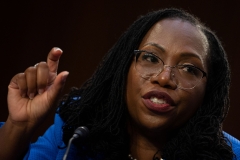 (CNSNews.com) —When asked whether someone who doesn’t know what a woman is should serve on the Supreme Court, some GOP senators said they didn’t have an answer, while others said the judge’s response was surprising and did not do her any good.

At the Capitol on March 24, CNSNews.com asked some GOP senators, “Senator Blackburn asked Judge Jackson to define the word ‘woman’ and Judge Jackson said, ‘No. I can’t.’ Should someone who does not know what a woman is serve on the Supreme Court?”

Sen. Mike Rounds (R- S.D.) said, “That rather surprised me. I had expected that that would, might be one answer that would be pretty straight forward. But I think maybe they’ll give her an opportunity to correct her answer. But I was surprised.”

CNS News followed up with, “Could you provide a definition of the word woman?”

“I think I could, but right now I’ve got to go to a meeting,” the senator said.

Sen. Mike Braun (R-Ind.) said, “I would say that if you’re not willing to come up with some opinion on that question, rather than just saying I can’t answer it because I’m not a biologist, I don’t think that did her any good. I would’ve been interested in a better response.”

CNS News followed up with, “Could you provide a definition of the word woman?”

“I’d go right to the dictionary and read it, so I think it’s the saying that most of us would refer to,” said Braun.

Sen. Chuck Grassley (R- Iowa) told CNS News, “I don’t think I have an answer for that. If you want to know the answer, go to the dictionary.”

On March 22 at the confirmation hearings before the Senate Judiciary Committee, Sen. Marsha Blackburn (R-Tenn.)  asked Judge Ketanji Brown Jackson if she could define the word woman, and she responded saying that she could not.

Judge Jackson: “Not in this context, I’m not a biologist.”

Judge Jackson: “Senator, I’m not sure what message that sends. If you’re asking me about the legal issues related to it, those are topics that are being hotly discussed, as you say, and could come to the court. So, I’m not able to—”