Sen. Shaheen: 'I've Been Showing My ID to Vote Since I Turned 21' 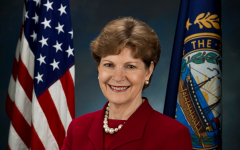 (CNS News) -- Although she voted in favor of the For the People Act, which would have overridden state voter ID laws had it eventually passed, Sen. Jeanne Shaheen (D-N.H.) said that in her state a voter ID is required and she has been showing her ID "since I turned 21."

At the U.S. Capitol on Tuesday, CNS News asked the senator, “Do you believe that someone should have to show their ID in order to buy alcohol?”

Senator Shaheen said, “That’s been a system that we’ve generally had.”

Shaheen replied, “Well, in New Hampshire we have to show our ID to vote. I’ve been showing my ID to vote since I turned 21.”

When CNS News asked, “And do you believe that should be upheld?” the senator said, “I think it’s up -- a lot of it is up to the states. I think -- hopefully we can set some federal rules that make it easier for people to vote everywhere.”