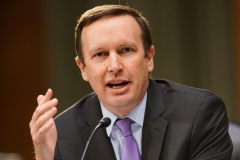 (CNS News) -- Although President Joe Biden's budget proposal would run up $14.5 trillion in cumulative deficits over the next 10 years, Sen. Chris Murphy (D-Conn.) said, "we don't have a balanced budget" because of the spending and tax cuts set by the GOP and President Trump.  He added that he does not foresee a balanced budget "anytime in the near future."

At the U.S. Capitol on Wednesday, CNS News asked Sen. Murphy, “President Biden has presented Congress with a budget that proposes running $14.5 trillion in deficits over the next decade. Will Congress ever balance the budget?”

He said, “You’ve got some extraordinary things happening in the United States today. We’ve got a pandemic that is slowly coming under control, way too many people that are out of work. Right now, it makes sense to make some investments in the economy and the health of the country.”

Sen. Murphy continued, “But if we really want to look at why we don’t have a balanced budget, you don’t have to look much further than the policies of President Trump and the senate and house republicans. They ran up massive, totally unjustified deficits just in order to give tax breaks to their wealthy friends. Right now, we’re running deficits in order to save the country from economic and health disaster. That’s a worthwhile investment. It's just unconscionable to me that we ran up debt in deficits just to cut taxes for corporations that didn’t need them.”

As a follow-up, CNS News asked Sen. Murphy, “In what year will Congress balance the budget?”

He said, “It’s going to certainly take a long time given the amount of debt and deficit that we have today. According to the budgets that we’ve been operating under, it's not anytime in the near future.”

When asked whether balancing the budget is a current goal of Congress, Sen. Murphy said, “I don’t know. Every family always operates with some amount of deficit financing. I didn’t pay cash for my home, so I think there’s an argument for the government to be — ultimately it’s interest rates. As long as interest rates are low, you can argue that it’s smart to operate with some amount of deficit financing. So it’s all relative to the cost of borrowing, there’s not a static answer to your question. It’s all relative to how much we’re paying for the money we’re borrowing.”

Determining a timeline for when Congress may balance the budget “depends on what the interest rates are five years from now or ten years from now,” he said.

The New York Times has reported, "President Biden would like the federal government to spend $6 trillion in the 2022 fiscal year, and for total spending to rise to $8.2 trillion by 2031. That would take the United States to its highest sustained levels of federal spending since World War II, while running deficits above $1.3 trillion through the next decade."