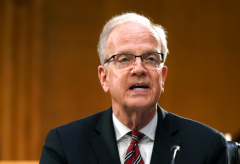 (CNS News) -- When asked whether people should be required to produce an ID in order to vote, just as they must produce an ID to buy alcohol, Sen. Jerry Moran (R-Kansas) said that he supports voter ID in his home state.

At the U.S. Capitol on Tuesday, CNS News asked the senator, “Do you believe that someone should have to show an ID in order to buy alcohol?”

“I support that in my home state of Kansas," said Sen. Moran.