Sen. King: Voter ID Not Needed in Maine, 'No Fraud, No ID' 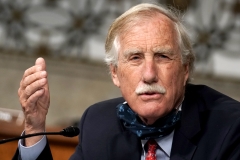 (CNS News) -- When asked whether people should be required to produce an ID in order to vote, just as they must produce an ID to buy alcohol, Maine's Sen. Angus King, an independent who caucuses with the Democrats, said ID is not necessary in his state.

At the U.S. Capitol on Tuesday, CNS News asked King, “Should someone have to show an ID in order to buy alcohol?"

The senator said, “Sure, because we have an age limit.”

Senator King replied, “In Maine, we haven’t had it for years. No fraud, no ID.”