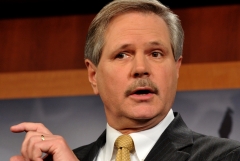 (CNS News) -- When asked whether illegal aliens should be given a pathway to citizenship, Sen. John Hoeven (R-N.D.) said, “no,” and added that “people have to go through the regular, lawful process.”

Senator Hoeven said, “If you’re talking about amnesty, no, that’s not something that they should be given. Again, people have to go through the regular, lawful process, right?”

In a follow-up question, CNS News asked, “And is the southwest border secure?”

He continued, “That’s just fundamentally important, and we really need to go back to the policies that we had in place under the prior administration that were working, and you’ve seen that with the incredible amount of migrants who are coming here illegally. We’ve got to get control of our border.”