Sen. Grassley: 'You Can’t Be a Secure, Sovereign Nation If You Have an Open Border' 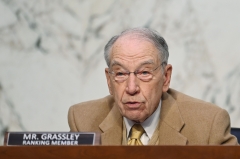 "You can’t be a secure, sovereign nation if you have an open border," Grassley said.

“The president of the United States ought to uphold the law, and he’s inviting violation of the law," said Grassley.

“But I would say it would be a pathway that would be fairly long and you can’t have criminal activity and they have to pay all their taxes,” he said.

In a follow-up question, CNS News asked, “And is our southwestern border secure now?”

He continued, “And I was down there three months ago and the Border Patrol told us that they were called in to advise a transition team before Biden was president, and they were asked what to do about the border.

“The Border Patrol said, ‘Just leave things alone. If you want to bring people in the country, bring them in in an orderly way.’ And then they said they didn’t do it. So on January 20th, they just opened the border up and invited people in. That’s not right.”

“The president of the United States ought to uphold the law, and he’s inviting violation of the law,” said Senator Grassley.