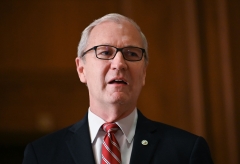 (CNS News) -- When asked whether the Biden Administration should work with Facebook to suppress postings it considers vaccine misinformation, Sen. Kevin Cramer (R-N.D.) said, “Absolutely not.”

At the U.S. Capitol on Tuesday, CNS News asked the senator, “Should the Biden administration work with Facebook to suppress postings they consider to be vaccine misinformation?”

Sen. Cramer laughed and said, “Absolutely not. Facebook’s getting what they deserve after, you know, proving that they’re willing to be the arbiters of truth and censor things. And now they -- it shouldn’t be surprising that the Biden administration somehow thinks that Facebook would be happy to collude with them on censoring what they consider to be misinformation.”

“No, the best thing for Facebook to do is to let people decide for themselves based on the information that they gathered,” he said.

Last week, the Biden administration admitted that it is working with Facebook to suppress certain posts on Facebook that contain alleged “vaccine misinformation.”