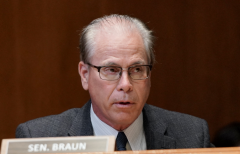 He also said Congress likely will not act to live within its means until “there’s a calamity or a sequence of crises that would force us to do that.”

At the U.S. Capitol on Thursday, CNS News asked Sen. Braun, “President Biden has presented Congress with a budget that proposes running $14.5 trillion in deficits over the next decade. Will Congress ever balance the budget?”

Sen. Braun said, “No. You’re asking the right senator because I’m one of just a few that’s actually worried about that.”

“They’ll never balance the budget unless there’s a balanced budget amendment or at least a statute,” he said. “And just look at the behavior over the last 20 years. So instead of thinking about that and using things like the modern monetary theory, which says that big deficits and cumulative debt don’t really make any difference — they’ve never even run a lemonade stand, if they think that they can run an operation like that.”

“The mentality here is so different from any other place in the country,” Sen. Braun continued. “I ran a business for 37 years, and you get the full rigor of competition. You’d get laughed out of your banker’s office if you came in with a report card like this place has got.”

Sen. Braun explained what he believes to be the cause of the deficits.

“There’s no political will here to actually take on the real drivers of our chronic deficits, which would be Social Security, Medicare, Medicaid, mandatory spending, and they put a lot of other stuff in mandatory status as opposed to discretionary,” he said. “It’s just a bunch of folks that shrug it off and don’t have enough accountability from their constituents back home, and we’re going to have a serious consequence down the road after you’re through with the sugar high of all this spending.”

As a follow-up, CNS News asked Sen. Braun in what year might Congress balance the budget.

He said, “It won’t be balanced until there’s a calamity or a sequence of crises that would force us to do that. If you look at how long this has been, doing it like it is currently, I think it’d be a tough prediction to make.”