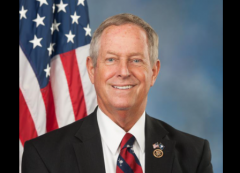 (CNS News) -- When asked whether a person should be required to show an ID in order to vote, as is often required to purchase alcohol, Rep. Joe Wilson (R-S.C.) said, “Sure,” and added, “To be against voter ID is really tragically revealing of not promoting election integrity and security.”

At the U.S. Capitol on Tuesday, CNS News asked the representative, “Should people be required to show their ID in order to buy alcohol?”

“Sure,” he said.  “Also to get a prescription. And I learned a lesson, okay? And that is that we were told that people couldn’t get an ID and that people of age couldn’t figure out how to get an ID. That’s not true.”

“I was getting a prescription and this really nice young pharmacist was there, and she asked me for my ID, even knowing I was a member of Congress,” said Wilson. “And I said, ‘Sure,’ and then I said, ‘Hey, do people of age have IDs?’ And she started laughing and said, ‘Of course they do.’”

“And so, to be against voter ID is really tragically revealing of not promoting election integrity and security,” Rep. Wilson said.