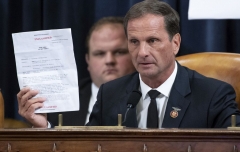 (CNS News) -- When asked whether a person should be required to show an ID in order to vote, as is usually required to purchase alcohol, Rep. Chris Stewart (R-Utah) said, “For sure.”

At the U.S. Capitol on Wednesday, CNS News asked the representative, “Do you believe that someone should be required to show an ID in order to buy alcohol?”

“Yeah, for sure,” the representative said.