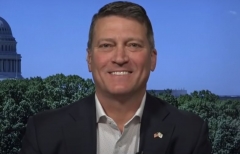 Asked whether a person should be required to show an ID in order to vote, as is required to purchase alcohol, Rep. Ronny Jackson (R-Texas) said “Absolutely.”

At the US Capitol on Tuesday, CNS News asked the congressman, “Should someone be required to show their ID in order to buy alcohol?”

“We’ve always been doing that, so I would say, ‘Yes’” Rep. Jackson replied.

“And what about to vote?” CNS News asked in a follow-up question.

“To vote, absolutely,” he said.

Democrats in the House are pushing to enact H.R. 1, or some variation thereof, which would eviscerate state voter ID laws.

In a June 22 press release, House Speaker Nancy Pelosi (D-Calif.) said that H.R. 1, otherwise known as the For The People Act, is “the remedy to the anti-democratic tide that is sweeping our nation.”

Pelosi claimed that the bill will combat “the hundreds upon hundreds of state-wide voter suppression bills already introduced, the vicious gerrymandering plotted by partisan lawmakers and the torrent of big dark special interest money suffocating the airwaves.”

Critics of the bill, such as House Minority Leader Kevin McCarthy (R-Calif.) warn that H.R. 1 would “weaken the security of our elections and make it harder to protect against voter fraud.”

In a March 2 press release, Rep. McCarthy said that, although Democrats call H.R. 1 the “For the People Act,” it’s really the “For the Politicians Act.”

“It’s not designed to protect your vote. It’s designed to put a thumb on the scale of every election in America and keep the swamp swampy,” McCarthy said.