Rep. Peters: Voter ID Laws Not ‘Justified’ If ‘The System is Working’ 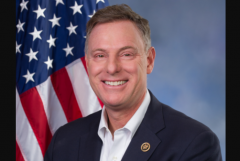 (CNS News) -- When asked whether a person should be required to show an ID in order to vote, as is usually required to purchase alcohol, Rep. Scott Peters (D-Calif.) said “no,” and added that if “the system is working,” voter ID requirements are not justified.

At the U.S. Capitol on Tuesday, CNS News asked the representative, “Should someone be required to show an ID in order to buy alcohol?”

“I don’t think that’s traditionally been required -- no,” he said.

“Should it be?” CNS News asked.

The representative said, “I don’t think there’s much evidence of voter fraud under the current rules, if any.”

When asked whether requiring voter ID should be left up to the states or the federal government, Rep. Peters said, “I think there’s a federal interest in having people be not deterred from voting, and if the system is working in an open way, without those requirements, I don’t believe that they’re justified.”