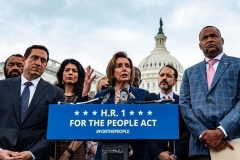 Despite intensive efforts by House Speaker Nancy Pelosi and her fellow Democrats to pass their "For the People Act," the bill stalled in the U.S. Senate. (Photo by JIM WATSON/AFP via Getty Images)

(CNSNews.com) – Asked whether a person should be required to show an ID in order to vote, as is required to purchase alcohol, Rep. Barry Loudermilk (R-Ga.) said he thinks so.

At the U.S. Capitol on Tuesday, CNSNews asked the congressman, “Should someone be required to show an ID in order to buy alcohol?”

In a follow-up question, CNSNews asked, “And what about to vote?”

Democrats in the House are pushing to enact H.R. 1, or some variation thereof, which would invalidate recent electoral safeguards, including voter identification requirements, passed by a number of states.

Many Democrats say red states are making it easier to suppress the vote; but Republicans say they’re trying to make it harder to cheat.

House Speaker Nancy Pelosi has said that H.R. 1, the “For The People Act, is “the remedy to the anti-democratic tide that is sweeping our nation,” and it will combat “the hundreds upon hundreds of state-wide voter suppression bills already introduced, the vicious gerrymandering plotted by partisan lawmakers and the torrent of big dark special interest money suffocating the airwaves,” she said in a press release on June 22.

But House Minority Leader Kevin McCarthy (R-Calif.) said the bill would “weaken the security of our elections and make it harder to protect against voter fraud.”

McCarthy says H.R.1 would more appropriately be called the “For the Politicians Act.”

“It’s not designed to protect your vote. It’s designed to put a thumb on the scale of every election in America and keep the swamp swampy,” McCarthy said.

The Democrats' election overhaul bill has passed the House, but it failed to advance in the Senate without any Republican support.

More than Three-Fourths of Voters Reject H.R. 1 Provisions Regarding Voter I.D. and Public Funding of Campaigns

McConnell: Voting Bill Aims to 'Federalize All Elections' to Benefit 'Democrats at the Expense of the Republicans'