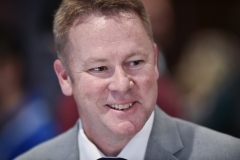 (CNS News) -- When asked whether a person should be required to show an ID in order to vote, as is required to purchase alcohol, Rep. Warren Davidson (R-Ohio) said, “Absolutely.”

At the U.S. Capitol on Tuesday, CNS News asked the representative, “Should someone have to show an ID to buy alcohol?”

Rep. Davidson said, “Well, normally all you’re doing there is to see whether somebody is 21 or not.”

In a follow-up question, CNS News asked, “Should they have to show an ID in order to vote?”