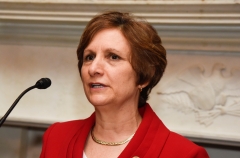 (CNS News) -- When asked whether a person should be required to show an ID in order to vote, as is usually required to purchase alcohol, Rep. Suzanne Bonamici (D-Oreg.) said voting by mail is “a secure system that increases access to the ballot,” and every state should conduct their elections by mail.

At the U.S. Capitol on June 29, CNS News asked the representative, “Do you believe that someone should have to show their ID in order to buy alcohol?”

Rep. Bonamici said, “I think it depends on the circumstances. Sometimes, if they’re obviously not underage.”

In a follow-up question, CNS News asked, “Should someone be required to show an ID to vote?”

“I’m from Oregon, and we all vote by mail, and the signature is verified, so we don’t have to show ID to vote because we show ID when we register to vote and then the signatures are verified,” said Bonamici.  “If every state did that, we’d be much better off because it’s a very secure system that increases access to the ballot.”

When asked whether or not requiring voter ID should be left up to the states, Rep. Bonamici said, “I don’t think so.”

“I think at this point we’re at a time when there are allegations of voter fraud that are not supported by evidence, and we should set a standard, and that standard should increase access to the ballot and make voting accessible to every citizen,” she said.