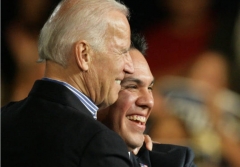 (CNSNews.com) - Rep. Pete Aguilar (D-Calif.) on Wednesday evaded giving a direct answer to the question of whether someone should have to show an identification to vote in the United States.

At the U.S. Capitol, CNS News asked Aguilar: “Do you believe that someone should have to show their ID in order to buy alcohol?”

He responded: “Well, these are all, you know, important questions, and I know you have a job to do, so we’ll get carried on with the work of our day here today. But I appreciate that you have an opportunity to ask these things.”

CNSNews.com then asked: “And what about to vote?”

CNS News then asked again: “So, do you believe that someone should have to show their ID in order to vote?”

Aguilar said: “I think everybody should have an opportunity to vote, everyone who legally can cast a ballot should be able to.”

A provision in H.R. 1 would prohibit states from requiring people to show an ID to be able to vote. The provision is entitled, “Permitting use of sworn written statement to meet identification requirement for voting.”

“Congress will continue the fight to pass H.R. 1, which would secure the ballot for voters now,” House Speaker Nancy Pelosi (D.-Calif.) said on June 25, after the bill had been blocked in the Senate.

The Republican National Committee has denounced the Democrats’ efforts, saying, “Democrats are currently attempting a partisan power grab with their radical H.R. 1/S. 1 ‘For The Politicians; Act.” This bill, filibustered for the time-being, said the RNC, “is a federal takeover of state elections that would eviscerate commonsense state voter ID laws currently in place in many states, force states to allow ballot harvesting, and make taxpayers fund the campaigns of career politicians.”