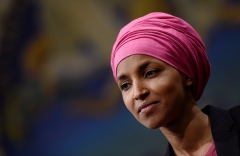 (CNSNews.com) – Some 200 rabbis from the Coalition for Jewish Values (CJV) sent a letter to House Speaker Nancy Pelosi last week, calling for the removal of Rep. Ilhan Omar (D-Minn.) from the House Foreign Affairs Committee.

The rabbis are offended by Omar’s June 7 tweet accusing Israel of committing “unthinkable atrocities” in the response to the Hamas attacks on the Jewish State.

“The mob attacks on American Jews today are directly attributable to the rhetoric of Rep. Omar and those who stand with her within and beyond Congress,” the rabbis wrote.

“Rep. Omar’s unfounded assertion that Israel committed ‘unthinkable atrocities’ by defending lives against an openly genocidal terror organization is not merely offensive, it is pernicious—for it is grounded in the blood libel and the calumny that Jews poisoned wells during the Black Death.”

The rabbis the lack of a “forceful response” from the Democrat Party, “tolerance of anti-Jewish hatred has proliferated.”

On June 7, Rep. Omar posted on Twitter, “We have seen unthinkable atrocities committed by the U.S., Hamas, Israel, Afghanistan, and the Taliban,” apparently comparing the United States and Israel to a terrorist organization. In a video attached to her Twitter post, Rep. Omar asked Secretary of State Antony Blinken about having the International Criminal Court (ICC) intervene in the situation in the Middle East.

Although 12 House Democrats denounced Rep. Omar on Twitter, the Congressional Progressive Caucus “stooped to playing identity politics” and insisted that the attacks on Rep. Omar were because she is a “Black Muslim woman,” the rabbis said.

“Jews are being attacked day and night on American streets by mobs incited by Rep. Omar’s

rhetoric,” the letter reads. “Yet the Congressional Progressive Caucus claims that it is Rep. Omar who is facing ‘threats.’ We are appalled.”

Speaker Pelosi defended Rep. Omar in her June 11 press conference, saying, “she has a point that she wanted to make and she has a right to make that point,” attributing the negative reaction to “how it was interpreted."

On June 10, Rep. Omar attempted to clarify her comments. However, the rabbis pointed out that Rep. Omar’s “clarification” of her controversial statement “contradicts what she said in committee, for she indeed equated democracies with terror organizations, and, importantly, the ICC’s purview does not extend to ‘democratic countries with well-established judicial systems.’”

The letter continues, “If her “clarification” is to be taken at face value, it is an admission that her statements were baseless. Thus your reply that Rep. Omar ‘has a point that she wanted to make, and she has a right to make that point’ is both acceptance of bigotry and an abdication of leadership.”

The CJV noted it also has condemned Republican Rep. Marjorie Taylor Greene’s “insensitive comments” comparing Speaker Pelosi’s vaccine policies on the House floor to the treatment of Jews during the Holocaust, for which Greene eventually apologized.

The rabbis said, “Rep. Omar’s words are far more dangerous in nature than those of Rep. Greene, and, therefore, the vehement desire to combat anti-Semitism requires that they be met with at least equal consequence.”

In closing, the letter states, “To protect Jewish Americans and, moreover, safeguard the integrity of the House Foreign Affairs Committee, we thus insist upon the removal of Rep. Omar from her appointment.”

That is unlikely to happen. Rep. Omar still holds her position on the Foreign Affairs Committee.