Is a 15-Week-Old Unborn Baby a Human Being? Sen. Hirono: 'The Supreme Court Has Said...a Woman Has a Right to Choose' 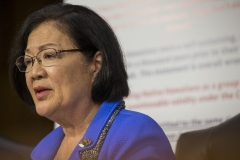 (CNS News) -- When asked if a 15-week-old unborn baby is a human being -- in relation to an upcoming Supreme Court case -- Sen. Mazie Hirono (D-Hawaii) said she is “going with” the Supreme Court, which ruled in Roe v. Wade that “a woman has a right to choose” on abortion.

At the U.S. Capitol on Tuesday, CNSNews.com asked Sen. Hirono, “The Supreme Court this fall will review a Mississippi law that bans most abortions after 15 weeks of pregnancy. Is an unborn baby at 15 weeks a human being?”

Hirono responded: "Who are you with?"

Hirono then said: "What's CNSNews? Well, as the Supreme Court has said, until they overturn Roe v. Wade, they have said that a woman has a right to choose and make a decision on abortion, and that’s what I’m going with. So.”

CNSNews.com then asked: "So if an unborn--"

CNSNews.com asked: “If an unborn baby is not a human being, what species is it?” The senator did not respond and walked away.

The Supreme Court has agreed to review Dobbs v. Jackson Women’s Health Organization this fall, which questions the constitutionality of a Mississippi law that bans most abortions after the first 15 weeks of pregnancy.

Jackson Women’s Health Organization’s is challenging the law based on the claim that the Supreme Court’s past cases do not permit states to ban abortion before the baby is viable, which generally occurs around 24 weeks of pregnancy.

The case is scheduled to be heard in the fall and could have significant implications on the Supreme Court’s past landmark rulings on Roe v. Wade and Planned Parenthood v. Casey.