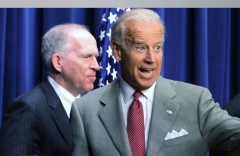 Vice President Joe Biden and then-Assistant to the President for Homeland Security and Counterterrorism, Feb. 10, 2011. (Photo by Alex Wong/Getty Images)

(CNSNews.com) - John Brennan, who served as director of the Central Intelligence Agency during President Barack Obama’s second term, sent out a series of tweets over the past six days arguing that “climate change is the most urgent national & international security threat we face” and that Americans should vote for former Vice President Joe Biden.

“Climate change is the most urgent national & international security threat we face,” Brennan said in a tweet on Oct. 22.

In a tweet sent out on Tuesday, Brennan said: “During 2009 H1N1 pandemic, President Obama & VP Biden insisted that ‘science, facts, & data’ drive Administration policy & actions. Medical experts were valued & Americans were told the truth. That’s what an honest Administration does; that’s what you’ll get with President Biden.”

“C’mon, Texas!” Brennan said in a tweet sent out this morning. “As a former resident of Austin & a lifelong Longhorn, I know that Texans have a well-deserved reputation for calling out BS, especially when shoveled by a snake oil salesman like @realDonaldTrump.”

Brennan earned a master’s degree from the University of Texas in 1980.