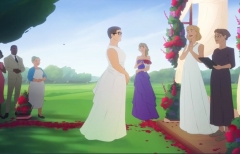 This is a screen capture from the U.S. Army recruiting ad.

(CNSNews.com) - The U.S. Army has produced an animated recruiting ad that depicts a same-sex marriage between two women and tells the story of how the daughter of this pair joined the Army.

The ad is part of a series of ads the Army is calling “The Calling.” On the GoArmy.com website, the Army says of these ads: “See how five young Americans made the most important decision of their lives, for reasons as diverse as they are.”

The ad featuring the animated same-sex wedding is about and narrated by Cpl. Emma Malonelord, who works as an “air defense enhanced early warning system operator.”

On its webpage about the ad, the Army says: “Raised by two supportive mothers, Emma felt lucky to have such powerful role models in her life. Inspired by their courage and conviction, she was determined to face challenges of her own and shatter stereotypes along the way.”

“When I was six years old, one of my moms had an accident that left her paralyzed,” Maloneland says in the ad. “Doctors said she might never walk again. But she tapped into my family’s pride to get back on her feet—eventually standing at the altar to marry my other mom.”

Here is a full transcript of the Army ad:

“This is the story of a soldier who operates through our       nation’s Patriot missile defense systems.  It begins in California with a little girl raised by two moms.  Although I had a fairly typical childhood—took ballet, played violin--I also marched for equality. I like to think I’ve been defending freedom from an early age.

“When I was six years old, one of my moms had an accident that left her paralyzed. Doctors said she might never walk again. But she tapped into my family’s pride to get back on her feet—eventually standing at the altar to marry my other mom.

“With such powerful role models, I finished high school at the top of my class and then attended U.C. Davis where I joined a sorority full of other strong women. But as graduation approached, I began feeling I had been handed so much in life, a sorority girl stereotype.

“Sure, I had spent my life around inspiring women, but what had I really achieved on my own? One of my sorority sisters was studying abroad in Italy. Another was climbing Mount Everest. I needed my own adventures, my own challenge. And after meeting with an Army recruiter, I found it—a way to prove my inner strength and maybe shatter some stereotypes along the way.